For all enquiries you can email us at info@hunterveinclinic.com.au or call

Jenny Hunter has worked in the field of vascular ultrasound for the past twenty years. 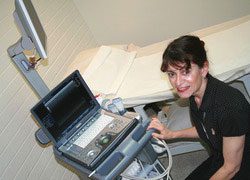 She trained at the Cardio Vascular Centre in Newcastle and was awarded the DMU (Vasc) in February 1999. She has specialized in phlebology work for the past fifteen years and has been the chief sonographer for Hunter Vein Clinic since its inception in February 2006. She is now the specialist venous sonographer at Alan Bray Vascular where she works closely with phlebologist Dr Naomi Hunter.

Jenny is an Affiliate Member of the Australasian College of Phlebology. She has performed diagnostic venous ultrasound examinations on literally thousands of lower limbs and has assisted with over 500 endovenous laser procedures.